Sweep, Mop, Wash and Dry All in One

We will message or email you when this product is back in stock.

Nofify me if it arrives

Thanks for your interest. Please leave your email and we will send you a notification as soon as we have the item in stock. Free Your Hands from Dirty Mops

The T10 saves hands from coming into contact with allergens or dirt. This mopping robot vacuum periodically auto-detects mops' dirtiness, returning to the base station for cleaning when needed and then resuming its floor cleaning duties. After cleaning, mops are auto-dried to prevent germs and bacteria. Bring out the spotless shine of your hard floors with a Narwal combo robot cleaner. It vacuums and mops hard flooring and eliminates stains and wet spots with ease. Dual side brushes sweep dirt, hair, and debris directly into the vacuum slot where the T10's filter efficiently traps dust, hair, and allergens - all without causing a racket.

Powerful suction and a no roll brush design to reduce the risk of hair tangling. LIDAR navigation, LSD laser mapping algorithms, and Simultaneous Localization and Mapping (SLAM) technologies makes the Narwal T10 smarter than ever. The robot will not get lost as long as the map route remains.

The ultra-fine microfiber mop pads ensure exceptional dirt removal and liquid absorption, yet are gentle to the floor.

10N Strong downward force for a thorough and deep clean. Get timely updates for new firmware. Super Easy to Use

Besides the Narwal APP, the T10’s unique operating system has also been designed to be manually controllable from the base station. One click is all that's needed to make the T10 build a map, vacuum, mop, and return home.

What's in the Box

No Need to Replace Modules

Besides moving bathroom mats around this thing does all general maintenance for house mopping for you. Just fill and empty the water/detergent sheets. Other floor mops were a sad excuse. Not for people with carpet but its 2022 who the hell has carpet

Thank you for your kind review of our robot.
We are sorry that we do not recommend using the robot to clean carpets with the mop mode.
The first time you use the cleaning robot, it will build a map of its surroundings. During this initial phase, we suggest removing the non-wall-to-wall carpets and similar objects. After the mapping is complete you can set up no-go zones on the map or use a magnetic strip for the cleaning robot can detect. This way it will not mop areas that aren't suited for mopping.
If you have any suggestions for our products or have any questions during use, please feel free to contact us.
Thank you again for your support of Narwal.
Wish you all the best.

A
ALEXANDRA GOTTWALD
In love

My house is mostly tile and I have two messy dogs that drool etc. I run it during the night in the dark and I wake up to a perfect house every morning! This thing makes me happy lol. Best money I have ever spent. It maps out your house and will go strategically everywhere and goes over 4x ….it works way better than I even imagined

Thank you for your kind review of our robot.
We are glad that you love your Narwal and it could help you make your house cleaner.
We are also honored that our products have been recognized by you. Your love and recognition are the biggest motivation for us to improve our products.
If you have any suggestions for our products or have any questions during use, please feel free to contact us.
Thank you again for your support of Narwal.
Hope you have a nice day:)

A
Anonymous
Works like a charm, also support team is awesome too

First, I bought the T10 a couple of days ahead of prime day, and it arrived really quickly so by Prime day, my robot mop is already up and running. Then I realized Amazon was selling it for a lower price as part of Prime day deal, I sent Narwal support an email and in just a couple of hours, they’ve refunded me the difference!

Now about the robot mop itself. It’s everything I’ve read in reviews, works like a charm, that is after I went through a snag during setup. The initial setup is not exactly intuitive like any other smart home appliance app, which usually requires registration of an account, Narwal decided to just send a verification code to the email, which got caught in my spam, so that was a bit of head scratcher but just a short one. The real snag is during adding a robot tin the app, as the app simply would not allow me to select my WiFi. After some google search I realized that the phone has to be on a 2G WiFi network, which IMO is very much legacy at this point. Most, if not all WiFi routers are by default operating with 5G by default. Fortunately, I have a WiFi system that allows me to configure a separate SSID just for Narwal to run on 2G, so that I don’t have to slow down all my other devices. After that, everything was smooth sailing.

So far I’ve been cleaning the floor every couple of days, and it is quite amazing how dirty your floor can be, and how well how T10 cleans! Truly a time saver.

I do find it to be a little inconvenient that if you move the base station, you have to remap the floor plan, while that’s understandable, I can’t simply carry the whole thing up stairs to let it do it’s job so upstairs remains manual work zone.

As of the vacuum, it’s not too bad but my roomba and dyson (handheld) are a LOT more capable so I would only use T10 as a mop.

End of the day, I bought it to be a robot mop for my main floor (the dirtiest part of the house) and it has met or even exceeded my expectation. 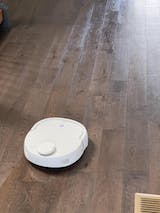 Thank you for your kind review of our robot.
It is our pleasure that our support team could solve the problem for you in time, that is our duty of us.
Also, we are also glad that you can use the robot smoothly and it can help you clean the floor well and save time so that you can have more time to do the things you like.
Regarding the problem with the map, we apologize for the inconvenience you have experienced but will improve on it in the future.
Thank you again for your support of Narwal.
Wish you all the best:)

I was skeptical at first and did a lot of research to find the perfect cleaning companion for our home. Our main floor is mostly hardwood and tile floors. I struggled to keep up with the sweeping and mopping. The Narwal is perfect for maintaining a clean home. We clean up messy spills on the floor and then use the Narwal to pick up dust and keep our floors clean. My kids spilt a bottle of soda on the our hardwood floor. I soaked up the mess with a towel and then focused the Narwal on the area for a 6 times wash. It cleaned it right up and the floor was not sticky afterwards.

For daily maintenance of our home, I run the Narwal every night, first vacuum and then mop. I am awake during the vacuum time because I need to empty the bin. But for the mop, it’s completely hands free. It’s much quieter than the iRobots and the app makes it easy to set no-mop areas.

Being in a brand new build, the fine dirt particles were the hardest thing for me to keep off my floors. With the Narwal, I don’t have to spend my time cleaning or drying up after mopping.

I enjoy walking barefoot in my home again.

Thank you for your high recognition of Narwal.
We feel honored that you finally choose Narwal after hesitation and we also appreciate that it could help you clean your floor quietly.
Narwal's product philosophy is to keep users' homes clean and walk barefoot, we are glad that our robot has done this for you.
Please feel free to contact us if you have any questions.
Thank you again for your support.
Hope you have a wonderful day:)

Thank you for your five-star review of Narwal.
We are responsible for every user and we would like to listen to the voice of customers.
If you have any suggestions or any questions, please feel free to contact us.
We will be glad to help you.
Wish you have a wonderful day:)

Thank you for your recognition of our robot.
We feel honored that Narwal could do a good mapping and quiet job for you, that is what we hope to do.
Narwal is committed to letting users free their hands, if you have any questions about the robot, please don't hesitate to contact us.
Thank you again for choosing Narwal.
Hope you have a nice day:)